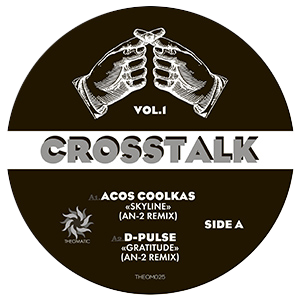 “Crosstalk” is a collaborative effort between Theomatic’s artists – a sort of a peer reinterpretation of each other’s works. First on the A-side is Acos Coolkas’ “Skyline”, from their first-ever single on Theomatic, released in 2005, receiving a sonic facelift from An-2. This is followed by An-2’s remix of D-Pulse’s first track from their latest full-length album, “Gratitude”, which first appeared as a mystery track on An-2’s 2018 SoundCloud mix, now seeing the light of the day by popular demand, and is not to be missed. On the flipside D-Pulse deliver a two-part remix of An-2’s “The Gift” – previously only available digitally. These two stunning pieces, filled with ethereal soundscapes, will delight any discerning Balearic-sound connoisseur. Rounding things off is Acos Coolkas’ remix of An-2’s seminal “Lazy Sun”.