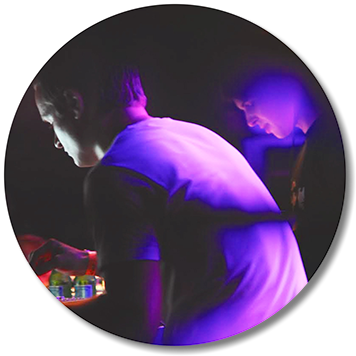 Acos Coolkas are Konstantin Atomas and Vasiliy Basalaev from Omsk, Russia. Omsk by the way is the largest city of Southern Siberia situated at the crossing of Transsiberian Magistral and the Irtysh river - 2500 kilometers from Moscow to the East. It's pretty hard to imagine where it is unless you are a geography expert.

The name of the project Acos Coolkas is a combination of its participants’ web nicknames. Met in 2001, Vasiliy and Constantin discovered their tastes in music being almost the same. Both of them were inspired by the work of such bands as Space, Zodiac, Kraftwerk and other cosmic grooves from 70th and 80th, later - by the french electronic music of the Daft Punk wave and tracks of Metro Area. When the amount of accumulated emotions grew enough for creating something new, each of them started trying to do something on their own. They exchanged the results with each other, shared ideas, and finally decided to work together.

At first, Acos Coolkas tried to imitate that fantastic feeling of the outer space they got listening to the music of their idols. When the first experience came they started searching for their own sound. They realized that, looking for cosmos, first of all it’s necessary to look inside yourself, that miracle has its place in usual day-to-day life and it’s essential to see and recognize it, so every smallest thing can start to radiate the happiness.

The music of Acos Coolkas is an attempt to transmit its creators’ microcosmos to the listeners, and help everyone to discover his own universe.